The History and Origin of Wing Chun

The founder of the Wing Chun Kung Fu System, Miss Yim Wing Chun was a native of Canton [Kwangtung Province] in China. She was an intelligent and athletic young girl, upstanding and forthright. Her mother died soon after her betrothal to Leung Bok Chau, a salt merchant of Fukien. Her father, Yim Yee, was wrongfully accused of a crime and, rather than risk jail, they slipped away and finally settled down at the foot of Tai Leung Mountain near the border between Yunan and Szechuan provinces. There they earned a living by running a shop that sold bean curd.

During the reign of Emperor K’anghsi of the Ching Dynasty (1662-1722) Kung Fu became very strong in the Siu Lam [Shaolin] Monastery of Mt. Sung, in Honan Province. This aroused the fear of the Manchu government [a non-Chinese people from Manchuria in the North, who ruled China at that time], which sent troops to attack the Monastery. Although they were unsuccessful, a man named Chan Man Wai, a recently appointed civil servant seeking favor with the government, suggested a plan.

He plotted with Siu Lam monk Ma Ning Yee and others who were persuaded to betray their companions by setting fire to the monastery while soldiers attacked it from the outside. Siu Lam was burned down, and the monks and disciples scattered. Buddhist Abbess Ng Mui, Abbot Chi Shin, Abbot Pak Mei, Master Fung To Tak and Master Miu Hin escaped and went their separate ways. 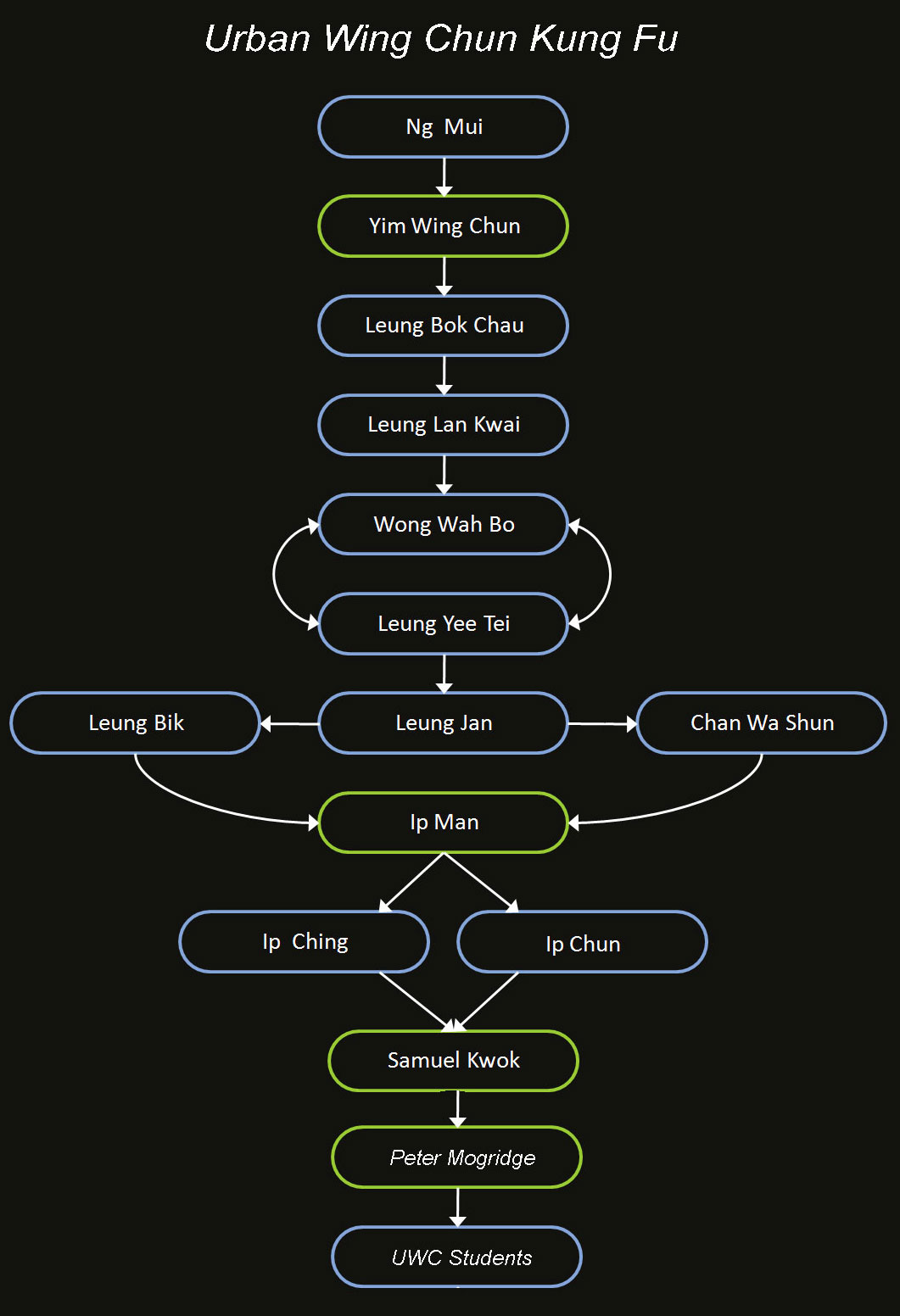 Ng Mui took refuge in the White Crane Temple on Mt. Tai Leung [also known as Mt. Chai Har]. It was there she met Yim Yee and his daughter Wing Chun from whom she often bought bean curd on her way home from the market. At fifteen, with her hair bound up in the custom of those days to show she was of an age to marry, Wing Chun’s beauty attracted the attention of a local bully. He tried to force Wing Chun to marry him, and his continuous threats became a source of worry to her and her father. Ng Mui learned of this and took pity on Wing Chun. She agreed to teach Wing Chun fighting techniques so she could protect herself. Wing Chun followed Ng Mui into the mountains, and began to learn Kung Fu. She trained night and day, until she mastered the techniques. Then she challenged the bully to a fight and beat him.

Ng Mui later traveled around the country, but before she left she told Wing Chun to strictly honor the Kung Fu traditions, to develop her Kung Fu after her marriage, and to help the people working to overthrow the Manchu government and restore the Ming Dynasty.

After her marriage Wing Chun taught Kung Fu to her husband Leung Bok Chau. He in turn passed these techniques on to Leung Lan Kwai. Leung Lan Kwai then passed them on to Wong Wah Bo. Wong Wah Bo was a member of an opera troupe on board a junk, known to Chinese as the Red Junk. Wong worked on the Red Junk with Leung Yee Tei. It so happened that Abbot Chi Shin, who fled from Siu Lam, had disguised himself as a cook and was then working on the Red Junk. Chi Shin taught the Six-and-a-half-point Long Pole techniques to Leung Yee Tei. Wong Wah Bo was close to Leung Yee Tei, and they shared what they knew about Kung Fu. Together they shared and improved their techniques, and thus the Six-and-a-half-point Long Pole was incorporated into Wing Chun Kung Fu. Leung Yee Tei passed his Kung Fu on to Leung Jan, a well known herbal Doctor in Fat Shan. Leung Jan grasped the innermost secrets of Wing Chun, attaining the highest level of proficiency. Many Kung Fu masters came to challenge him, but all were defeated. Leung Jan became very famous. Later he passed his Kung Fu on to Chan Wah Shan, who took me and my elder Kung Fu brothers, such as Ng Siu Lo, Ng Chung So, Chan Yu Min and Lui Yu Jai, as his students many decades ago.

It can thus be said that the Wing Chun System was passed on to us in a direct line of succession from its origin. I write this history of the Wing Chun System in respectful memory of my forerunners. I am eternally grateful to them for passing to me the skills I now possess. A man should always think of the source of the water as he drinks it; it is this shared feeling that keeps our Kung Fu brothers together.

Is this not the way to promote Kung Fu, and to project the image of our country?